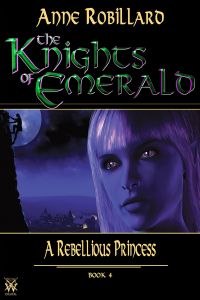 Knights of Emerald 04 : A Rebellious Princess

Book 4 of the saga The Knights of Emerald, A Rebellious Princess: Now nineteen years of age, Kira is finally knighted. She marries Sage of Emerald, unaware that he is possessed by the spirit of Onyx. When the latter decides to take his vengeance on Abnar, Wellan and the Knights of Emerald must intervene so he will not destroy their immortal ally. Witnesses to this duel, the Knights are astounded by the powers that Abnar had bestowed upon the Knights of old. When he becomes his self again, Sage has no recollection of the last four years of his life. Patiently, Kira teaches him all he has to know. In order to remain a Knight, the young warrior will have to submit to Elund's trials, but will he succeed? During the celebrations in honour of Parandar, the greatest of all gods, an agonizing man rides into the courtyard of the Castle of Emerald to tell the Knights that unknown creatures are decimating the coast. The valiant soldiers immediately rush to the rescue of the villagers. What trap has Amecareth set for them this time?