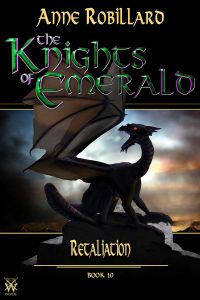 he Knights of Emerald: This epic tale takes place in a forgotten world in a time of great unrest as Amecareth, the Dark Lord of the Insect People, attempts to take over the known universe. It is the story of Kira, the purple child, born of the rape of Queen Fan of Shola by the despicable Emperor, who will ultimately bring about his downfall, and of the brave Knights of Emerald entrusted with her safety.

Book 10 of the saga The Knights of Emerald, Retaliation: Having reached the end of their incubation period, the insect larvae buried in the ground all over Enkidiev are about to awake. After several years of a well-deserved truce, the Knights of Emerald prepare to face this new scourge. Determined to take revenge on Parandar, the fallen god Akuretari takes advantage of this diversion to hunt down the humans who are in control of Danalieth's supernatural weapons. He will learn at his own expense that they are quite resilient.

When tragedy strikes the Kingdom of Diamond, King Onyx finally shows his true colours and tries to annex this kingdom to his own. Undeterred, his loyal friend Hadrian of Silver will try to make him listen to reason.

Frustrated by the incessant setbacks of his sorcerer, the Dark Emperor decides to launch his own offensive. His deadly intervention will finally set the prophecy into motion, but at the same time, deprive Lassa of his last defenders.

HUNTING DOWN THE ENEMY