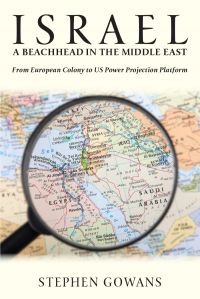 Israel, A Beachhead in the Middle East

One US military leader has called Israel “the intelligence equivalent of five CIAs.” An Israeli cabinet minister likens his country to “the equivalent of a dozen US aircraft carriers,” while the Jerusalem Post defines Israel as the executive of a “superior Western military force that” protects “America’s interests in the region.” Arab leaders have called Israel “a club the United States uses against the Arabs,” and “a poisoned dagger implanted in the heart of the Arab nation.”

Israel’s first leaders proclaimed their new state in 1948 under a portrait of Theodore Herzl, who had defined the future Jewish state as “a settler colony for European Jews in the Middle East under the military umbrella of one of the Great Powers.” The first Great Power to sponsor Herzl’s dream was Great Britain in 1917 when foreign secretary Sir Arthur Balfour promised British support for a Jewish homeland in Palestine.

In 1967 Israel launched a successful war against the highly popular Arab nationalist movement of Egyptian leader Gamal Abdel Nasser, the most popular Arab leader since the Prophet Mohammed. Nasser rallied the world’s oppressed to the project of throwing off the chains of colonialism and subordination to the West. He inspired leaders such as Nelson Mandela, Fidel Castro, Hugo Chavez, and Muammar Gaddafi.

Viewing Israel as a potentially valuable asset in suppressing liberation movements, Washington poured billions into Israel’s economy and military. Since 1967, Israel has undertaken innumerable operations on Washington’s behalf, against states that reject US supremacy and economic domination. The self-appointed Jewish state has become what Zionists from Herzl to an editor of Haaretz, the liberal Israeli newspaper, have defined as a watch-dog capable of sufficiently punishing neighboring countries discourteous towards the West.

Stephen Gowans challenges the specious argument that Israel controls US foreign policy, tracing the development of the self-declared Jewish state, from its conception in the ideas of Theodore Herzl, to its birth as a European colony, through its efforts to suppress regional liberation movements, to its emergence as an extension of the Pentagon, integrated into the US empire as a pro-imperialist Sparta of the Middle East.

“Stephen Gowans’ book is a concise and pertinent de-mythologizing of Zionist propaganda, from early Zionists and founders, to the fascist global right leadership at present … a tantalizing historical read, and a huge and valuable resource text, both.” John Steppling, Counterpunch