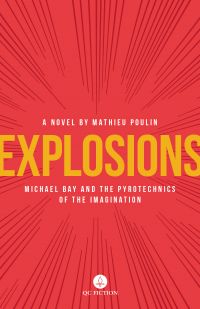 Explosions: Michael Bay and the Pyrotechnics of the Imagination is something completely different, a reimagining of Michael Bay as a cinematic genius in an action comedy of a novel that features an allstar cast (Michael Bay, Meatloaf, Don Simpson, Jerry Bruckheimer, Plato, etc.). Zany and irreverent, it’s a satire-ridden medley of fact and fiction, an epic inside joke for those up on their ’90s pop culture and Philosophy 101.

What if Bad Boys was a film about decolonization? What if The Rock was about failing to be recognized by one’s peers? If Armageddon was about a post-human future and the mysteries of meaning? And Pearl Harbor a reflection on the freedom afforded an artist when transforming fact into fiction?

What if Michael Bay was, against all odds, a misunderstood cinematic genius?

CAST (IN ORDER OF APPEARANCE)