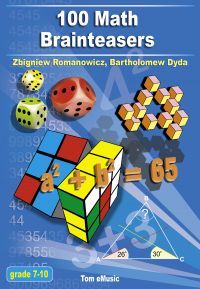 100 Math Brainteasers (Grade 7-10) is a subtle selection of one hundred arithmetic, algebra, and geometry assignments, which efficiently train the mind in math skills. It will be helpful for students attending High School and also in preparation for Mathematical competitions or Olympiads at a younger age. The assignments can equally be used in the classroom or in extracurricular activities. The fun and games are delightful, original, and solving them is even more enjoyable thanks to the funny illustrations.Most of the math problems do not require any exceptional mathematical proficiency, but above all, they challenge one's creativity and ability to think logically. Only a few solicit the knowledge of algebraic expressions and rules of geometry. Authors:Zbigniew Romanowicz, Ph.D., was an outstanding teacher and a well-known proponent of mathematics among young people. He belonged to the great Russian-Polish school of mathematics. He served as Director of the Institute of Mathematics at the Wroclaw University of Technology in Poland. In the years 1992-2004, he chaired the jury of the Polish Mathematics and Logic Games championship, which is within the works of the Paris-based 'Comite International des Jeux Mathematiques'. He ran the popularly acclaimed interscholastic math clubs. For 10 years, he was chairman of the Committee of Regional Mathematical Olympiads. He was an avid promoter of mathematics and an activist of the Polish Mathematical Society.Bartholomew Dyda, Eng. D., a graduate of the Faculty of Fundamental Problems of Technology at the Wroclaw University of Technology in Poland, is working at the Institute of Mathematics and Computer Science at the Wroclaw University of Technology. Since 1992 he competes in the Mathematical and Logic Games championships, achieving considerable success. He is a two-time recipient of the bronze medal at the International Championship of Mathematical and Logical Games in Paris, France.