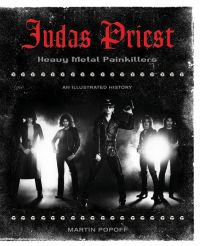 When the world thinks of heavy metal in its pure, potent, undiluted form, it is none other than the Metal Gods, Judas Priest, that instantly come to mind. Chrome and black leather, studs and whips and chains, a chopper on stage ? these are the tools of the trade for Rob Halford and his legendary band of Birmingham bashers. Back stronger than ever, Judas Priest, in 2005, issued their acclaimed Angel of Retribution album. It is long overdue that their story be told.

Published to coincide with a new album in fall 2007, Martin Popoff's book, Judas Priest: Heavy Metal Painkillers, examines the band's rich legacy album by album, anthem by anthem, recounting the band's shocking split with Halford in the mid '90s and his triumphant return in 2003. Having interviewed all the principals in the band repeatedly over the years, Popoff gives a firsthand account of the Priest's rocky, often comical ride through the '70s, through the gold and platinum records of the '80s, detailing the long road back to the status the band now enjoys as heavy metal's proudest ambassadors. Accompanying Popoff's lively text are more than 500 full-colour images, the band's gleaming steel imagery springing to life through a myriad of photos from the stage, memorabilia shots, cover graphics, and all manner of Priestly feast for the electric eye.