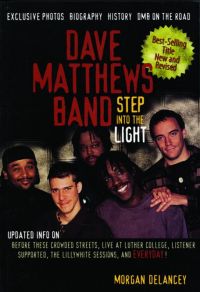 The best-selling first book about the Grammy-winning mega-band. Step Into the Light? with the Dave Matthews Band. From their initial stints in 1991 at the local bars of Charlottesville, Virginia to selling over 15 million CDs and becoming one of North America's most successful touring acts, this book chronicles the musical development of Dave Matthews and fellow band members Carter Beauford, Stefan Lessard, Leroi Moore, and Boyd Tinsley. The initial 1998 biography offered a complete chronology of the Grammy-winning band's rise to stardom, exclusive interviews, a first-hand account of DMB on the road, and never-before-published photos. The New Revised 2nd Edition adds exclusive new photos to the original and two new chapters that chart the band's activities from 1998-2001, right up to the release of Everyday! Step into the Light provides fascinating commentary on Before These Crowded Streets, Live at Luther College, Listener Supported, and the band's guest appearance on the best-selling Santana Supernatural; it also expands on the personal lives of each band member, and provides new coverage of DMB tours, the creation of Dave's own record label (According to Our Records), and the growth of a worldwide DMB fandom. This new, revised edition of the authoritative book on DMB is completely up to date.  Find out where DMB has come from, how it got to Everyday, and where it's going soon.