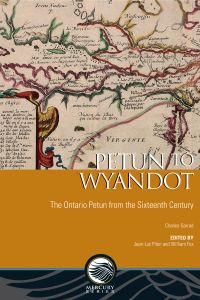 In Petun to Wyandot, Charles Garrad draws upon five decades of research to tell the turbulent history of the Wyandot tribe, the First Nation once known as the Petun. Combining and reconciling primary historical sources, archaeological data and anthropological evidence, Garrad has produced the most comprehensive study of the Petun Confederacy. Beginning with their first encounters with French explorer Samuel de Champlain in 1616 and extending to their decline and eventual dispersal, this book offers an account of this people from their own perspective and through the voices of the nations, tribes and individuals that surrounded them.

Through a cross-reference of views, including historical testimony from Jesuits, European explorers and fur traders, as well as neighbouring tribes and nations, Petun to Wyandot uncovers the Petun way of life by examining their culture, politics, trading arrangements and legends. Perhaps most valuable of all, it provides detailed archaeological evidence from the years of research undertaken by Garrad and his colleagues in the Petun Country, located in the Blue Mountains of Central Ontario. Along the way, the author meticulously chronicles the work of other historians and examines their theories regarding the Petun's enigmatic life story.